When my Aunt Dorothy (Dora) Nettleton - Nee Marr died a large, leather bound photograph album was passed on to me. The album was originally the posession of my great aunt Eleanor (Nellie) Hall. She was the daughter of my Great Grandmother Margaret Ann Dixon by her second husband. Margaret Ann's first husband was Robert Foggan, a boot and shoe manufacturer and leather merchant of Bedlington, Northumberland, England. Robert died at the early age of 30 on 17 Jan 1879.

The family album contains photographs from the Hall, Marr, Foggan, Morell, I'anson and Steele families. The photographs shown here are in the original order as they appeared in the album. Where possible the pictures have been identified using information from Dora Nettleton and also by my mother's cousin Mae. A number of pictures remain unidentified however.

In the 1840s and 1850s men’s suits were worn tight and fitted close to the body. Women wore close fitting garments on the top half of their body while skirts were full, giving a smooth bell shape.
In the late 1850s suits became looser fitting with wider sleeves and legs
Hats in the 1860s had a curved brim. Women wore crinolines- close fitting bodice and full skirt. Hairstyle was plain, parted in the middle and often worn in a bun.
From 1865 the lounge suit, characterised by deep cuffs was popular.
In the 1870s tighter suits were again the norm but this time often double-breasted. Women started wearing a bustle
From 1880 to the late 1890s straight narrow suits were in fashion. Bustles were worn high in the small of the back. Corsets were worn tightly.
In the late 1890s a baggier suit was popular with men while women’s corsets created a heavy busted S-shaped stance.
From 1908 a close fitting dress with a long hobble skirt, narrowed at the ankles was popular. Hats were huge.

Of course these statements apply to those who closely followed the fashion of the age. It’s possible that the person in the photograph was a little behind the times!

We think this is Dorathy Foggan

On the back of this photograph, taken at ‘Maybury 32 Northumberland Street, Newcastle-on-Tyne’ is written in pencil ‘8967 Morrell E’

Dora Nettleton (Marr) once identified this picture , taken at ‘Maybury

Eleanor ‘Nellie’ Hall The original owner of the photograph album.

The picture was taken by T Blacklock of Bedlington

The outside edge of this picture was cut off to make it fit in the album so I can’t say where it was taken. On the back is written in pencil ‘Aunt Maggie’.

Aunty Dora thought it was Ethel Morrell a cousin of her grandmother on the Foggan side with her mother, seated, and father

Aunty Dora said this was Great Aunt Alice I'Anson, her mother’s sister with her son Fred. Fred grew up to be an electrical fitter and was killed at work.

Fred was killed in an accident at the English Electric Company's Willans works in Rugby on 15 August 1952 when some heavy machinery fell on him. - Mike I'Anson (grandson) 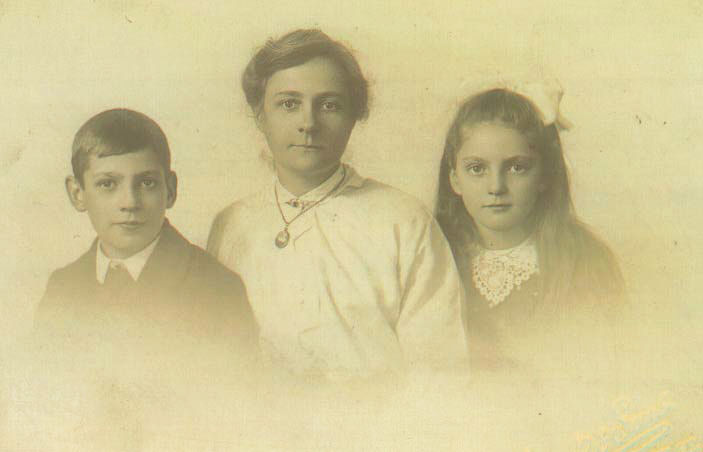 Mike I'Anson sent me the picture above to add to the album. It shows Alice I'Anson (Nee Foggan) with her children Fred and May

Aunt Alice Hall. Known as Thomas. The picture was taken on his 21st birthday about 1925. Picture taken at

Believed to be the in-laws of Nellie Hall

On the right is Joe Askew who married Nellie Hall with his brother, name unknown

We presume these are Foggan boys

believed to be Tom I’Anson

Eleanor Vera Marr had them in her bedroom when she was a teenager. Child probably Alice.