If you find this guide useful...

Can you help me out?

If you find these pages useful you can return the favour by downloading my FREE ebook from Amazon - even if you don't read it will help our rankings! I think you'll probably like it though.

It's the first book of a series of 9 books (so far) which tell the story of how life on Earth was saved from a cataclysmic extinction when a rogue planetoid collides with Earth in 7141. This first book deals with how humanity was made immortal, giving us the incentive to do something about an event so far in the future.

Take a touch of humour, add some genetic science and nanotechnology. Steep with conspiracy and stir in murder and despair. Season with romance between three people in a secret location. Garnish with morality.

The result is 'Immortality Gene', the first in a novel series by John and Shelia Chapman. Book 1 is FREE 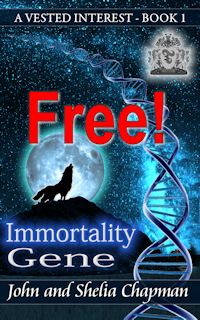 A review from Amazon.com:
A Vested Interest is well written and a great read.
It is a story of corporate jealousy at the highest levels, greed, spite, vengence, advanced techonology, medicine, love and betrayal, and the very essence of life itself.
WOW - that is a lot to cover in one book! Read this book - you will be glad you did.

You don't have to have a Kindle. There are free readers available for Android, Windows and Apple phones, tablets and PCs. Here's the link to download them.

Donna Rigden is fed up with her boss at D'Netics Research Facility. She resigns - big mistake! Donna is now on the hit list of one of the most notorious men in the corporate US. He's without morals and doesn't accept the word 'no'.

Sir Richard, Donna's new employer showers her with luxury and makes her an offer she can't refuse. Now, once she's signed the contract, he asks her to use her medical expertise to commit murder. Donna probably would have walked away, but she'd been swept off her feet.

Richard sides against her; Donna feels hurt and betrayed. She turns to her new friend for help. Donna's life is turned upside down. Two letters and two secrets steer her future. Donna must make a life changing choice. Once made, there's no going back. Was it the right choice?

Death strikes! The infirmary's doctor is ordered to give his patient a mystery drug. He's told the drug is either a cure or a curse. Will he stand by his Hippocratic Oath or follow orders?

Donna wakes from a deep coma with part of her memory gone. She starts to remember, but parts of her past don’t add up. She remembers being married to Richard but can’t remember why. Was she in love with him? She has flashes of two different lives. In one she’s happy. In the other she’s trapped. Which one is real?

The Big Farm Theory was a game first produced for Facebook on 19 January 2012. At the moment there's little to guide you in playing it, so that's why this guide has been produced. It's a work in progress with more being added as I advance through the game. I am not one of the developers or affiliated with them in any way. If you need to contact them use the link on the game play page 'Report/Contact this app'.

You'll probably find the most useful pages are 'What does this do?' and 'Missions' at the moment.

To play the game you'll need to be logged on to Facebook and go to the page http://apps.facebook.com/the-big-farm-theory/ .